Our foundation is our expertise combined with a passion for calf rearing.

We are driven by our quest for innovation and the desire to constantly improve.

Working together in partnership is a prerequisite for our success.

Are you aiming for healthy and efficient calf rearing and would like to get even better? Then we would like to share our ideas with you. 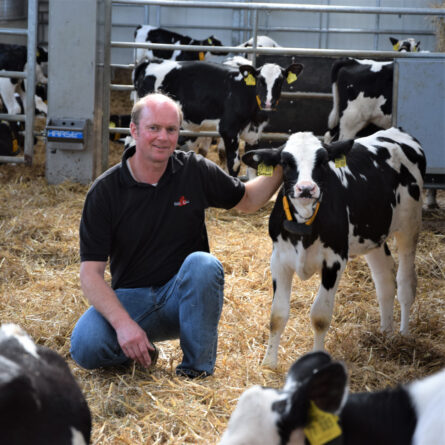 My name is Hans Joachim Holm, Partner and Managing Director of Holm & Laue.

I am passionate about calves. Healthy calves, from birth through to weaning.

That is why we at focus on the unique and natural needs of every calf. The result of our efforts: Your calves grow up healthy and strong.

It makes me proud when we are cited as calf experts and technology leaders. This is why we invite you to benefit from our expertise in order to optimise calf husbandry and feeding on your farm. Our ambition is to enable you to manage your animals' performance and health with the support of state-of-the-art technology. We would also like you to enable you to make business decisions on the basis of data and key figures.

There are 5 reasons why you should work with us of all people.

You value cooperation in a spirit of partnership.

We and our sales partners will work with you to design the right feeding or housing solution for your calves. If individual advice and competent on-site service are just as important to you as they are to us, we are an ideal match.

You are looking for a custom solution that meets your needs to a T.

Whether you are looking for a labour-saving solution for your bucket feeding and a MilkTaxi would be exactly right for you; whether you are interested in automatic feeding with the calf feeder or in the use of pasteurised whole milk: we'll find the right solution together. We promise.

You are looking for an overall concept for your calf rearing.

In addition to calf feeding, we also offer husbandry systems and calf housing solutions that will meet your needs. Your calves will develop into healthy heifers in healthy outdoor climate housing with spacious calf hutches, igloos and verandas. In addition to feeding technology, a well designed housing system will ensure your success in the calf barn.

You wish to lead your business into the future.

"You can manage what you can measure"

Our technology is intuitive to use and provides you with important key data conveniently across various media. The analytical tools provide you with a basis for your business decisions.

Quality and reliability are important to you.

And to us, as well. This is because you need to be able to rely on your feeding technology day in, day out. Which is why we attach great importance to the quality of our products. Their durability and the huge improvement in your calf rearing results will quickly pay for your investment. And if there is ever a technical problem, our service partners will provide a solution immediately. You can count on it.

On sailing boats, table tennis players and cellar doors that are too small 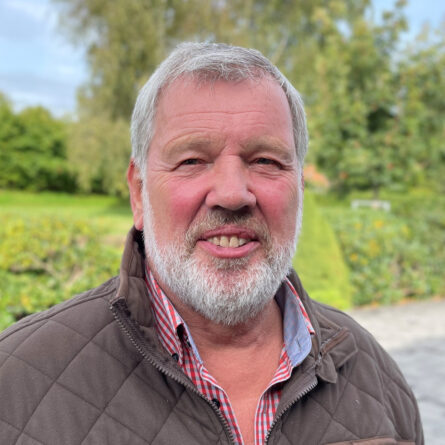 The early years at Holm & Laue – by Prof. Hans-Joachim Laue

The company was founded back in 1991. At the time, I was a professor at the Kiel University of Applied Sciences. Student Achim Holm visited me in my office in 1991 and was looking for a topic for his diploma thesis. I had the idea that calves' growth could be a control parameter for milk feeding. Together, we considered what the technology solution for scales which weigh calves' body weight while they are feeding could look like.

Thanks to my hobby, boat building, I had a very well-equipped workshop in my cellar. This is where we then built, or rather "knocked together", the first calf feeder.

The feeder worked without power! It was made up of three pots. There was milk in one, water in the second. There were two displacement bodies hung above these vessels. A third vessels led directly to the teat for the calves. There was a spring-loaded step-on plate mounted in front of the teat, which the calves had to stand on while drinking. When a calf stepped on the plate, the displacement body above the first pot pushed the milk into the third pot. The technology meant that only small portions were dispensed, limiting milk consumption. Now when a calf with a higher body weight stepped on the plate, water was delivered to the third pot in addition to the milk, because the second displacement body also pushed into the second “water pot”. As a result, heavier calves got thinner milk.

During the development, we kept running into problems and dead ends. But when we were stuck, we played a game of table tennis in the room next door until new ideas came up again.

In May 1992, the calf feeder was used for the first time for a diploma thesis. The study compared an ad-libitum group and a dilution group. The results were very good, because consumption was about 30 % lower which the gains were almost the same.

However, we then had a decisive key experience: During a visit to the trial barn, the student reported that she regretted not knowing which calf had drunk and which had not. And then it was clear to us: we had achieved the savings target, but had no animal control whatsoever! Even before we had got back from the barn to the cellar workshop, it was the end of this first feeder for us!

So we got back to work and designed the next feeder with detection. But then the next setback came: we made it so big and so heavy that it worked in principle, but didn’t fit through the cellar door! So this feeder was practically never used.

With the next feeder, we went for electronics. A double stand with milk from a storage tank with animal detection and milk quantity measurement. This time with a lighter design made of plastic hoods which we copied from boat building.

In Autumn 1992 Achim Holm was finally able to write his diploma thesis with the title “Behaviour and development of calves at a computer-assisted calf feeder with integrated animal weight recording”. 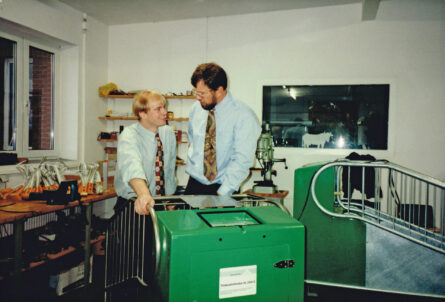 At this time, Achim Holm had to make an important decision: Should he accept a good job offer from a large company after graduation or dare to take the path with me into uncertain self-employment? On 4 May 1992 we then officially founded the company Holm & Laue.

With the help of a loan from my family, we were able to carry out the first building measures for offices and workshop on the former dairy farm belonging to the Holm family in the old calf barn in 1993. We also received a large financial grant from the Ministry of Economics, but it wasn't enough of course. 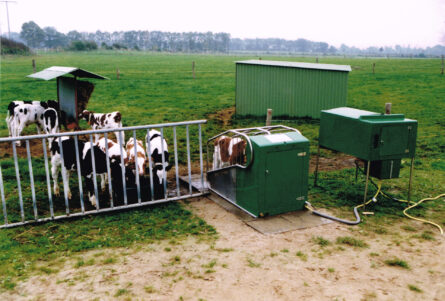 At that time, we didn't even think about selling our feeder. We simply wanted to solve the problem of feeding calves depending on their weight.

The next calf feeder was made up of a mixing unit that held and mixed over 100 kg of milk powder. In a double stand, two calves could drink at the same time, which was a unique feature at that time. 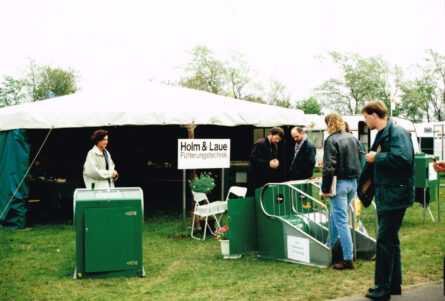 On 26 February 1994, we opened our new premises on Moorweg and presented ourselves for the first time at the NORLA trade fair in May 1994. At the time we shocked potential customers because we didn't want to sell them anything, we were just looking for test farms. It was a crazy time, because not everything was going smoothly by a long way. We had to do a lot of reworking, but after the tests were completed, 5 of the 6 test farms actually kept and purchased the feeders. So that was the beginning of the sales activities of the young company Holm & Laue. 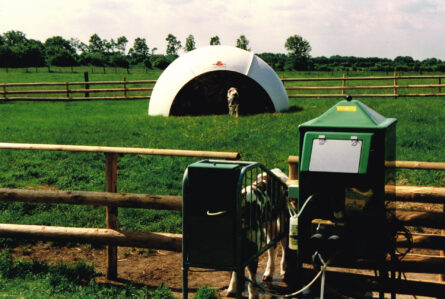 Soon, the first employees were also hired. For the workshop first, and then relatively quickly our colleague Ina Fey, who is still with us today, to support us in the office. And our sales colleague of many years, Volker Biss, who, while still a student, delivered the first calf feeders to farms using his father's Mercedes and set them up there.

In 1995/96 we then developed the H&L Joker which could supply up to 4 feeder stalls with two mixing tanks. This product soon attracted the attention of agricultural machinery dealers too.

Since then, we have developed continually, received a lot of encouragement and support, overcome setbacks and celebrated successes. And today, we deliver around the globe. Thanks to the support of our great employees and loyal distribution partners, we are able to make calf rearing around the world a little better every day. That makes me and of course all my colleagues at Holm & Laue very proud. 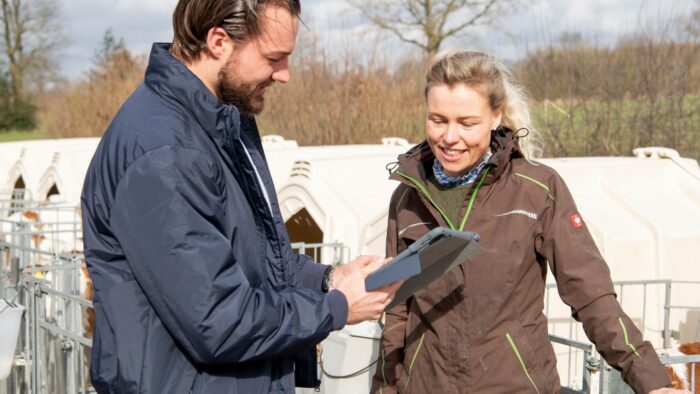 Would you like to receive a quotation or individual advice? Our sales partners will be happy to assist you. 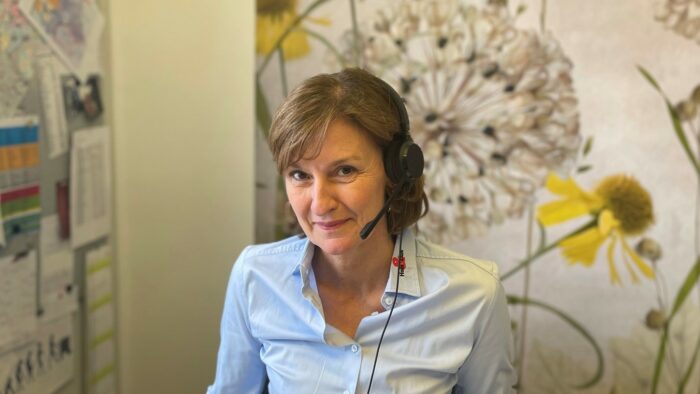 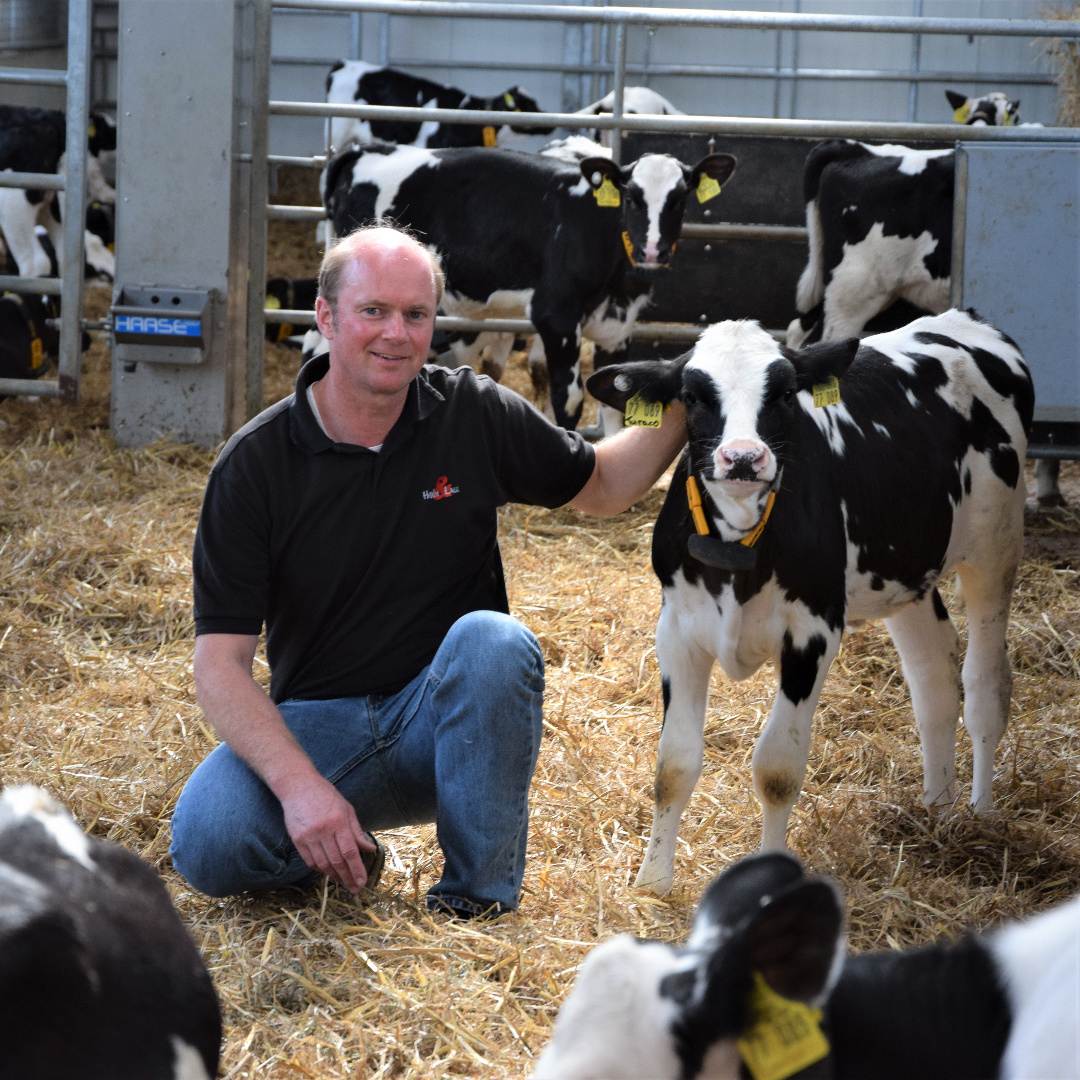 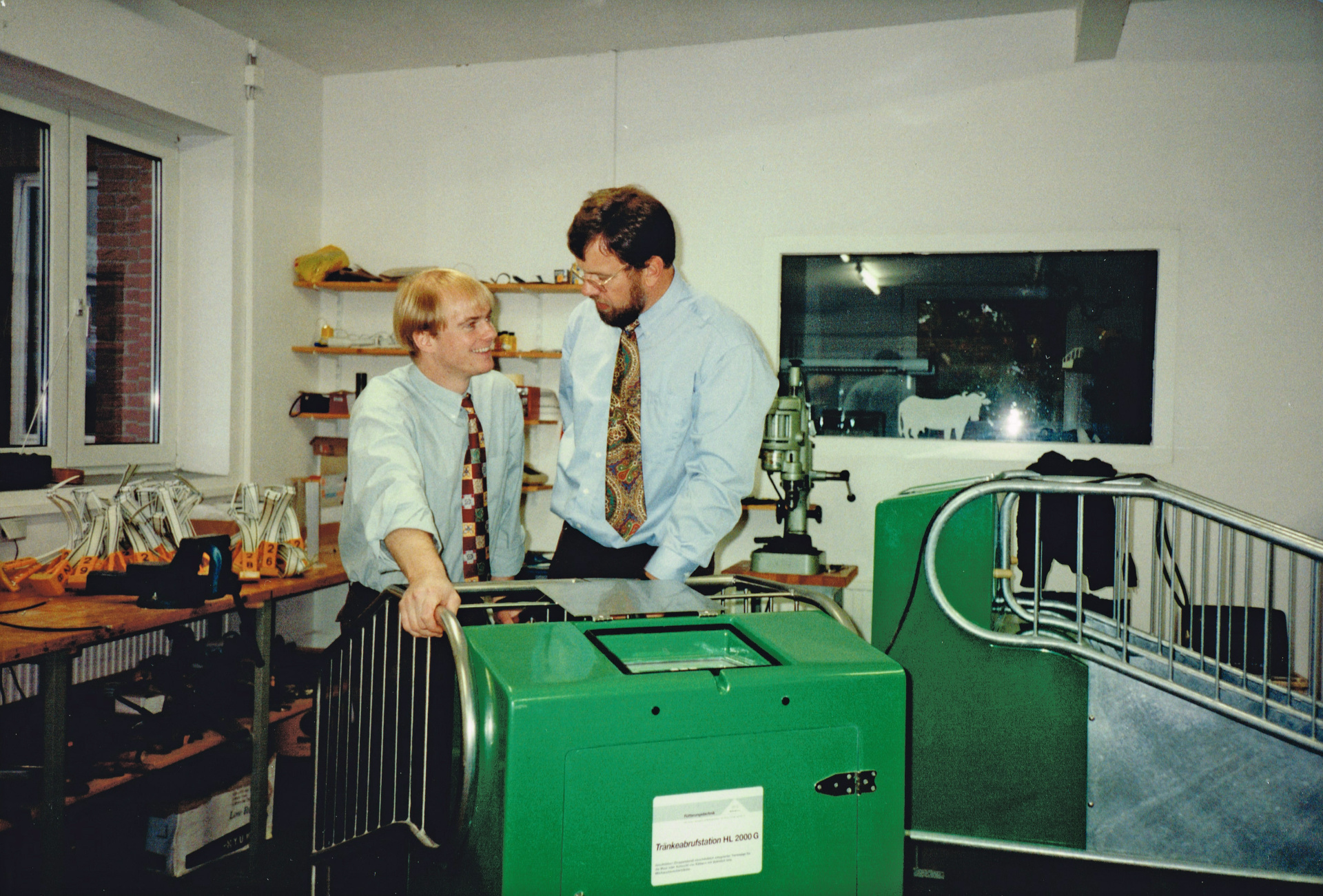 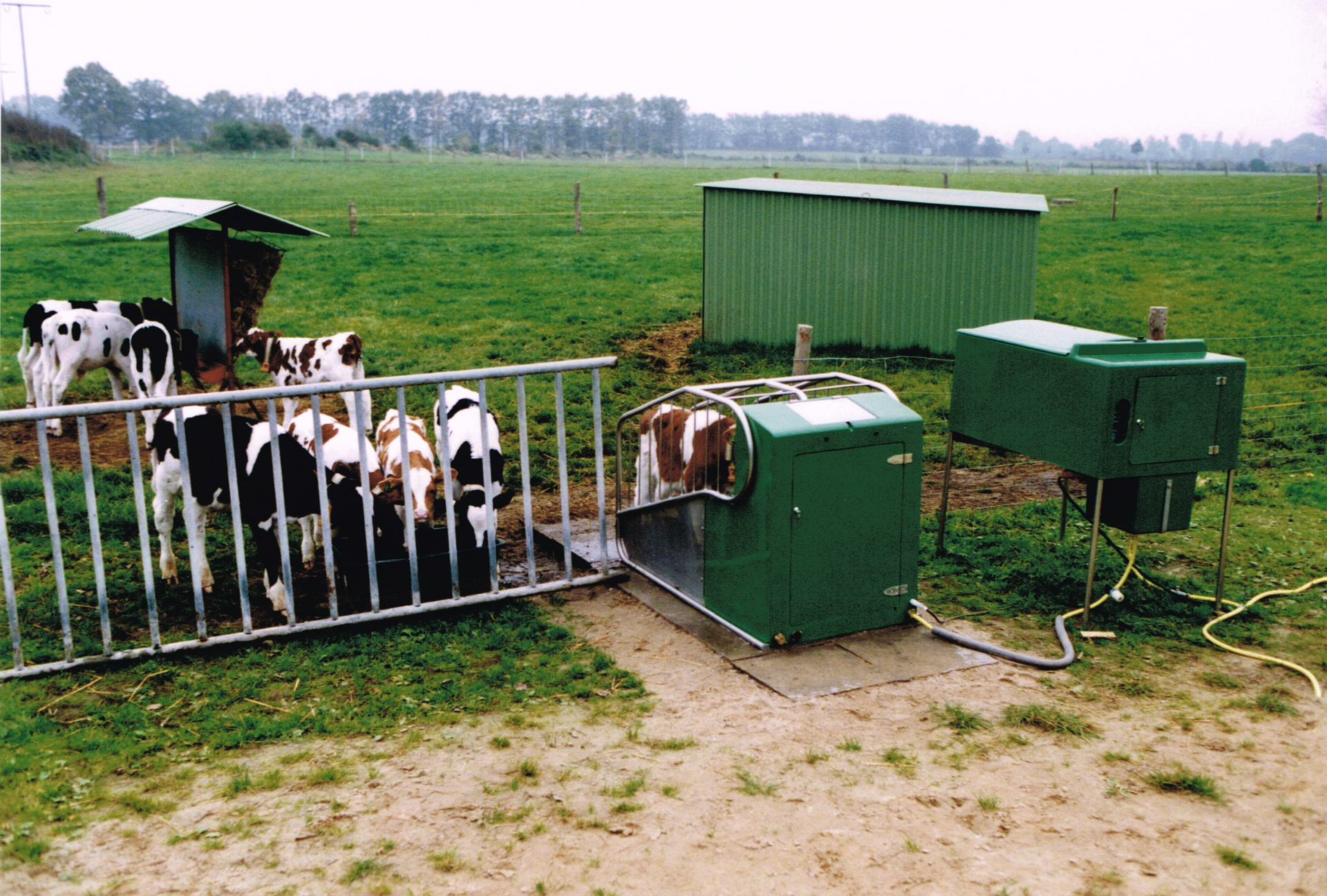 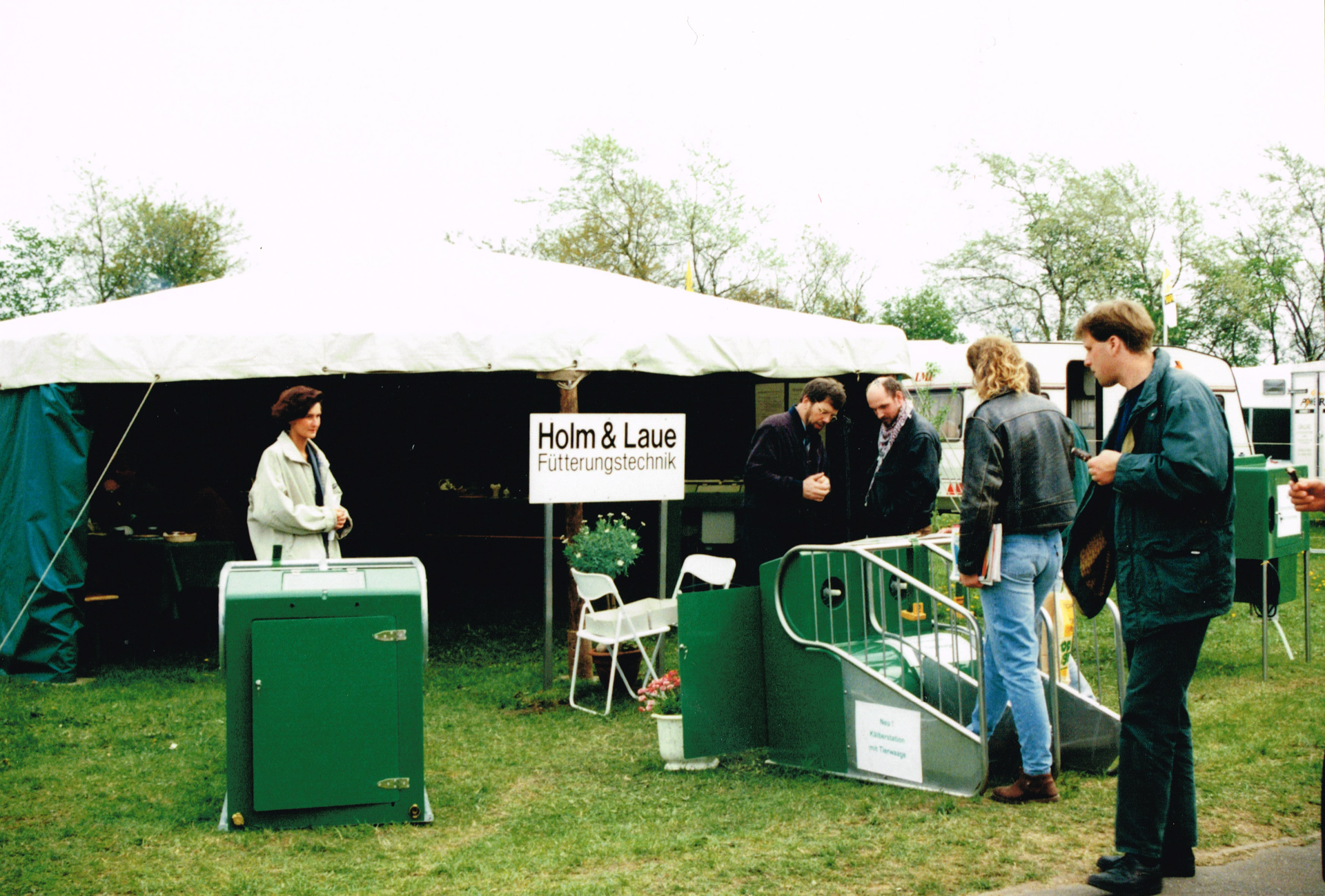 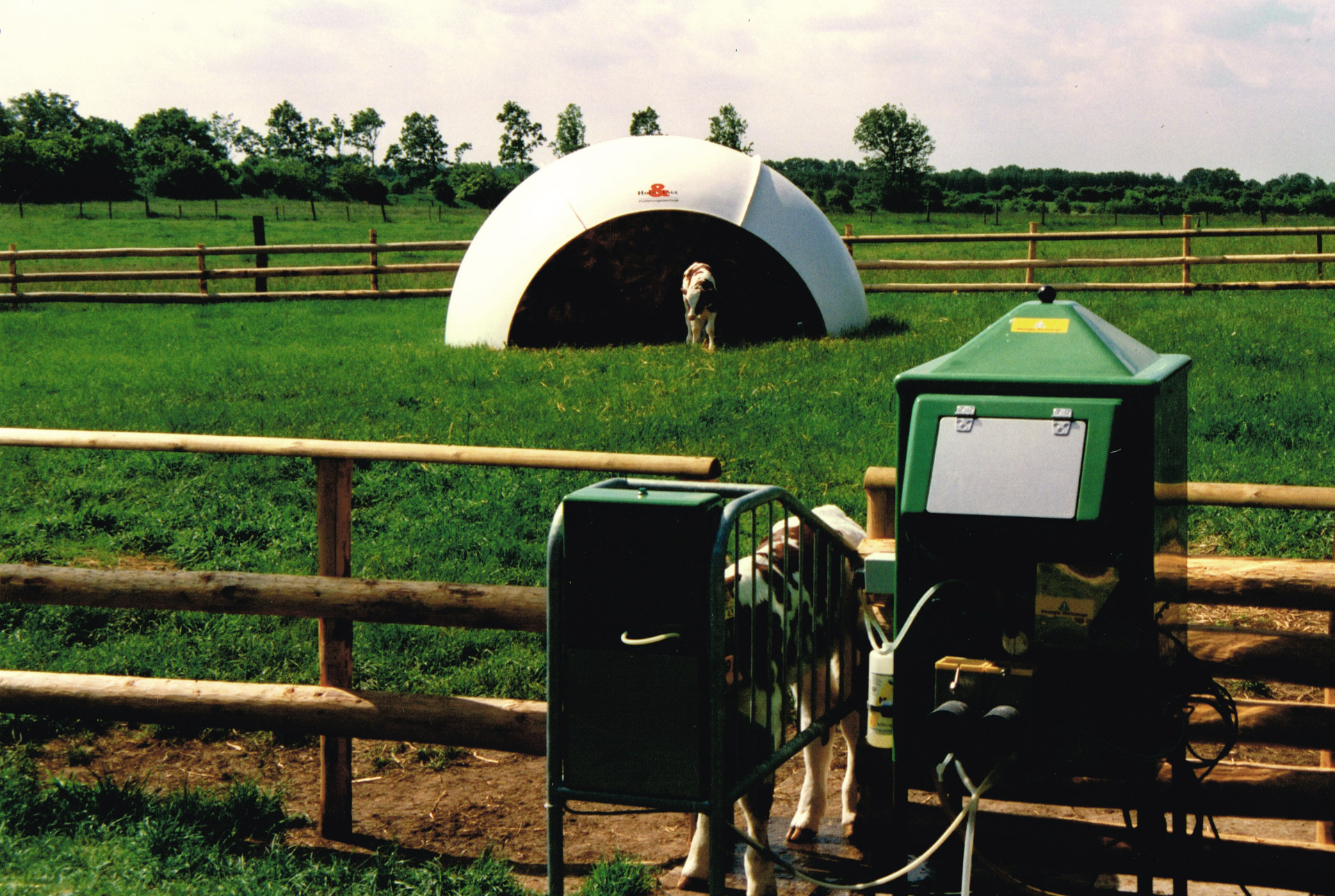